Posted on Aug 5, 2020 by Anthony in Magnet Limit, No Limit, Results Posted

A decent attempt at blending a magnet sculpture into a landscape. The foreground trees mimic the background foliage colors enough to be convincing. Wishing that background was a little more in focus, but johnny5 said his aperture was completely maxed out. Bottom line, it looks like a bridge, and it looks like it’s over some water. 1st place awards johnny5 with $115.

Ra Tascon decided to recreate the LDS Temple near his home. A great representation of the building itself, especially good ratios for constructing from an image. Some sort of greenery or fencing in the foreground would’ve helped the illusion that the Temple was part of the landscape. Well built and the sunny day helped sell the bright, white temple in Zen form. 2nd place awards Ra Tacon with $75.

3rd Place: “The Lantern” by Bastian

Bastian’s lantern is fairly effective at looking like it’s standing on the sidewalk. The difference in focus between the magnets and the background really makes them stand apart, but this was unavoidable with the setup. RIP the magnets Bastian dropped trying to get the shot :’-( 3rd place awards Bastian with $55.

Ben’s Space Elevator, while a very simple design, does look connected to the 3 buildings in the distance. Of all the entries, the overall focus is the best between background and magnets. The cloudy day definitely helped keep the magnet reflections in check. Ben agrees, not the best place for a space elevator, but the GM building looked enough like a proper base for one. 4th place awards Ben with $35.

Robert’s pyramid (constructed to see how many triangles could be held before the structure buckled) is not a bad effort. Though this looks like it was shot in front of a dirt/rock pile in the driveway, and nothing is convincing me otherwise. Some rocks and sand in the foreground would’ve aided in the illusion that this pyramid was amidst some great rolling dunes. 5th place awards Robert with $20.

Thanks to all our participants! This contest proved to be far more difficult than we’d imagined, and yet you accepted the challenge. Well done.

If you haven’t already, click on the images to check out the original size. And keep in mind that contests held here are independent of the Zen Gallery. Magnet sculptors can always submit photos to gallery.zenmagnets.com to win magnets as well. Spectators, keep your eyes peeled for the next contest, because you choose the winners. Contest Winners, we’ll email you your prizes soon.

Submissions are in for the July 2020 contest. Thankfully we didn’t scare everyone off with our fear mongering language and difficult theme. We have 5 entries for you to gaze in wonder over and then vote for your faves. 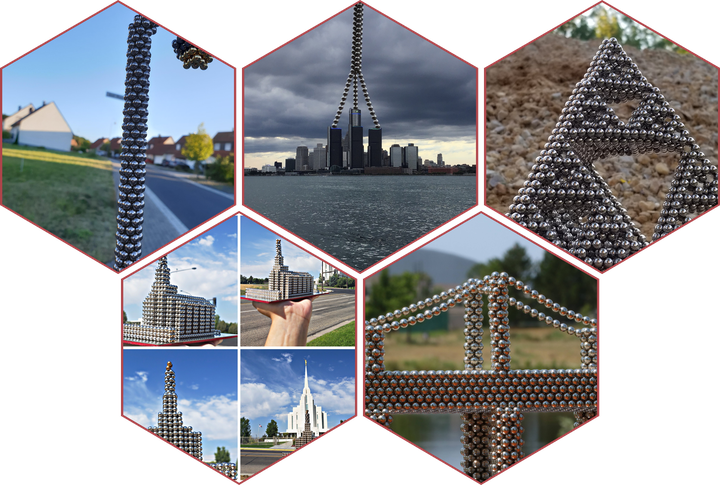 Be sure to check out the full size images for all the submissions. When you’re ready to cast your vote, head this way: