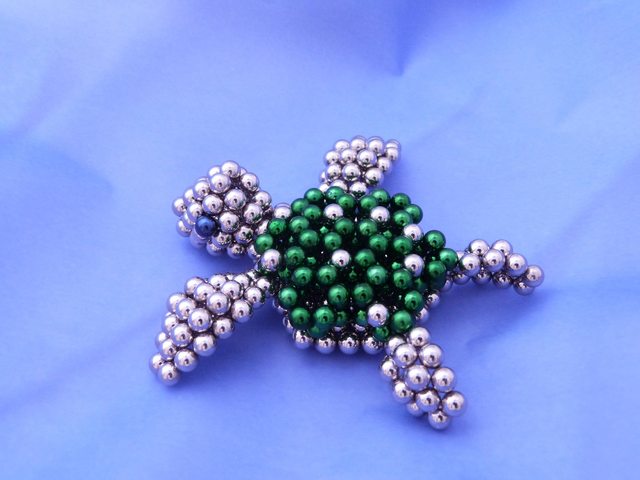 The judges must have had a difficult time with this contest, since there were so many wonderful entries. One dynamic that changes when a contest has many entries (like 15) as opposed to less entries (like 6) is that people are less likely to view the full size picture. The casual semi-anonymous internet judges are typically not magnet hobbyists, and will simply scan the automatically generated thumbnails for a quick impression. Simplicity and cleanliness get the advantage when contests are large, and this photo of a magnetic turtle is the epitome of such.  The highest rated photo of 6 turtles entered. $100 in Zen Credit awarded. “Schildi is made with 280 magnets (201 Zen/ 79 Neo). I started by playing around with some Magnets and suddenly I had a nice head of a turtle in my hand.” – KylarF 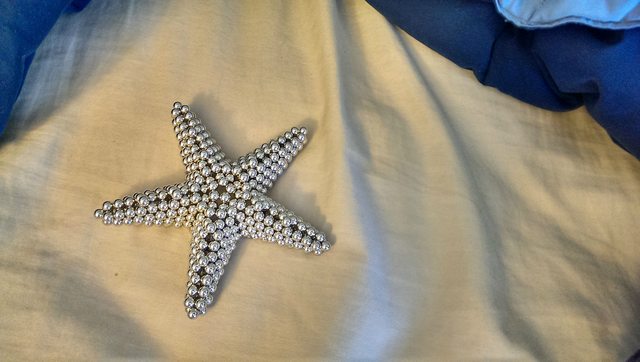 A Starfish with impressive symmetry, and background reminiscent of a sandy setting near water. Reasonably well shot, terrific shadows and composure, high resolution image. Clean thumbnail that leads to no confusion. $75 in Zen Credits awarded. “The center pentagon is very tricky, but with much patience, the magnets can be placed one at a time to form the “heart”. The visible stripe on each of the arms is equally delicate, since the magnets naturally want to lock into place… The photo itself was [shot] with my back to a window and a warm lamp a few feet to the left of the window.” – Aaron 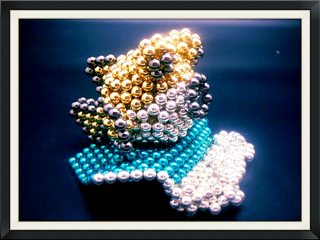 Titled: “Colorful Puffer Fish Rides the Wave”. Framed, post processed, and built with many techniques. The fish itself is 432 neoballs, and the wave is 168 neoballs.  $55 worth of Zen Credits awarded. “The main body is a double layer hollow sphere. The eyes are small hollow spheres made from 6 sets of 4 dot squares single layer. The tail & back fin use a triangular based assembly.” – Waynehjr1 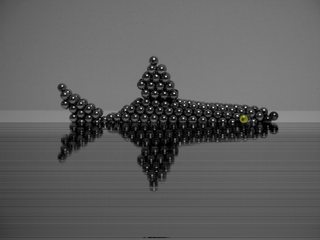 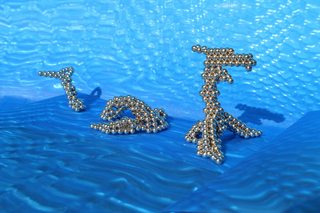 One of the Zen staff’s personal favorites. A “Sea Serpent” weaving through the surface of the water. One of those sculptures that we don’t know how to replicate upon viewing. Despite the technical expertise, it’s an artistically cohesive piece that isn’t one bit noisy or confusing. The image fits right into the imagination. $25 Zen Credits awarded. “This is a redesign of my original Water Dragon Surfacing v03 where I redid the front and rear fins,and supporting body structure, and had to remove 5 magnets from the design. The body segments rising out of the water are hollow. The head and neck sections are solid.” 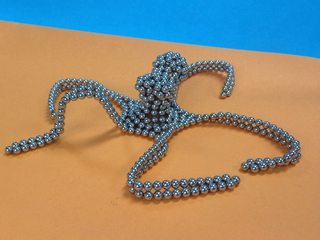 A beached sea monster, that feels grand of scale for such few magnets used. Slimy and wiggling, this imaginative piece is shot with fine focus, though the submitted resolution is smaller than average. $15 Zen Credits won. “I mostly made this out of 5-rings – just using some two-wide strips to do the tentacles. There are a couple of Zen Magnets metal bases, a pair or scissors and a two pence piece underneath the paper to help the tentacles hold their positions…and yeah I know it’s really a Pentapus.”

From now on Zen Credits, which are redeemable at face value at Zenmagnets.com and Neoballs.com, will be exchangeable for 1/2 of it’s value in Bitcoin. Bitcoin is a peer-to-peer decentralized cryptocurrency, not issued by any government or central authority. Think internet gold, but where gold gets value from chemical properties, bitcoin gets value from mathematical properties. Every $1 Zen Credit is convertible to $.5 Bitcoin, though not the other way around. We do accept bitcoin for magnet purchases, and encourage it with a 10% discount.

To trade your Zen Credits for Bitcoin. Email contact (a) zenmagnets.com with your bitcoin address and coupon code, and we’ll convert your magnet coupon into magic internet money at the live spot price.

An impressive showing of 17 Entries for the November Sea Life Contest. 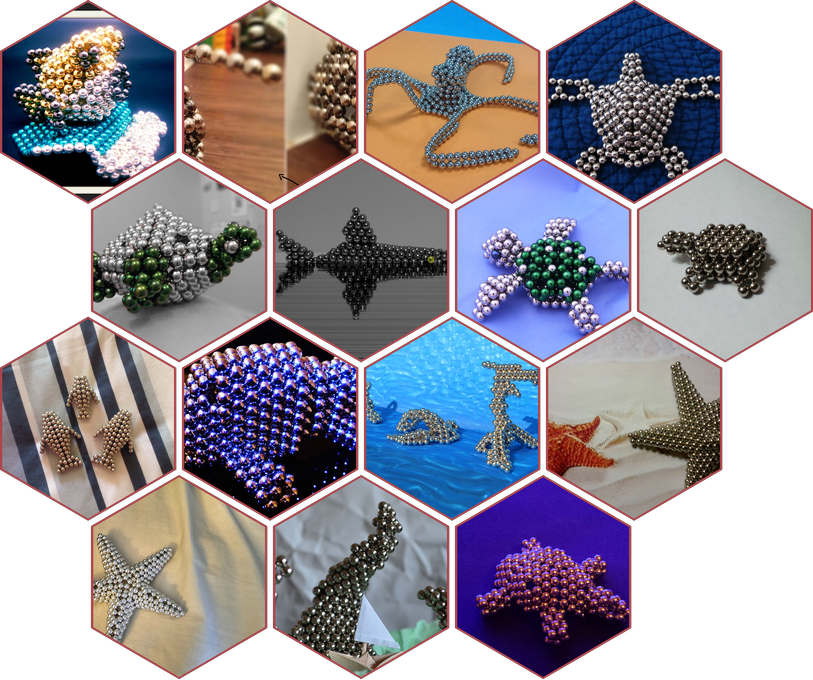 Judges, remember that this contest is a photography contest just as much as it is a magnet sculpture contest, overall aesthetic does matter. Voting deadline is 12/30/13