Here’s the completed gyroid in all of it’s glory:

Make sure to turn on the 720p for that clip. Also put on some red/cyan 3D glasses if you have them. The above was our recreation of the gyroid using the instructions given to us by origamimarie. It was hard! Zinc Neoballs used because we were simultaneously testing the coating stamina.

According to origamimarie, “the idea is actually quite simple, it’s just that the execution is rather fidgety.” Indeed the subunit found to approximate the repeating piece was much simpler than we had expected. 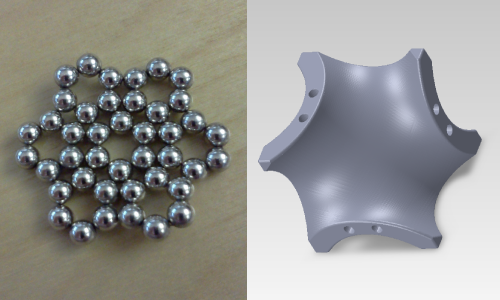 Since the entire gyroid separates all of 3d space into two regions, we treat polarity compatibility the same as anything else that has an inside and outside. Except instead of inside/outside or top/bottom, it’s really region A vs region B.

It’s easiest to start with a 3×3 layer on the bottom, just like this one from thingverse:

Begin by connecting adding two more hex rings at the corners of a subunit, and then attaching at the side. You will then have a choice about which direction the saddle between the two subunits bend. 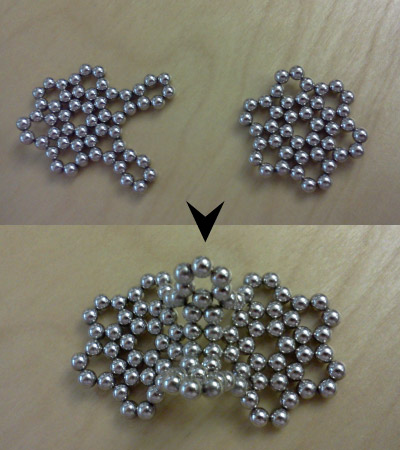 From here, the difficulty is simply keeping track of which side is which while constructing the first level. After that: ”Each layer is just like the one below it, only offset. So to think about layer 2, mentally pick up layer 1 and slide it up and toward the viewer one slot.” Props to origamimarie for completing such a difficult challenge.

If you make this from the same perspective of the thingverse photo, here is an image of the four orientations used. Should help you visualize. Click for full size. 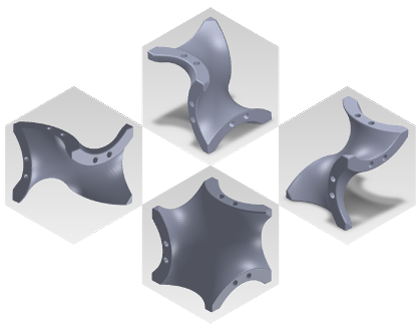